Do Mississippi River Cruises Have Casinos

What Is The Best Walkie Talkie For Cruise Ship

How Do You Find Last Minute Cruise Deals

Do you need a passport to go to Castaway Cay and Cococay?

No, passports are not required for the Bahamas, Caribbean Islands or Mexico. Castaway and CocoCay are in the Bahamas. Copies of your birth certificate will suffice. However, I do recommend that you have a passport.

Is it common to get seasick on a cruise?

Everyone is different but most people do not feel ill on a cruise. Cruises would not be so popular if getting seasick were a common occurrence. There are a number of very effective over-the-counter medicines you can take with you for peace of mind. If youre sensitive to motion in general, your doctor may prescribe a stronger medicine in patch form or pill form.

Were flying in for the cruise? Is it ok to fly on the same day as the cruise?

I do not recommend that you fly on the same day youre ship is departing. If your flight is delayed, the ship will not wait for you and you wont be entitled to a refund. Please, fly in the day before! There are a number of hotels near the airport and near the cruise port. Or, why not spend a night or two at Walt Disney World or Universal Orlando?

Can I book a land and sea package for a cruise and a visit at Disney World / Universal?

Yes! You can cruise either before or after your visit to the theme parks. I help make it very easy to do both.

How do I get to Port Canaveral from Orlando International / Disney World / Universal Orlando?

What time do the cruise ships depart Port Canaveral? What time to they return?

Cruises To The Caribbean

Ships the run Caribbean cruises alternate between two itineraries: 7-night Eastern Caribbean and 7-night Western Caribbean plus a stop at Castaway Cay or Perfect Day at CocoCay . The ports of call change frequently, depending on the cruise and time of year. Here the some of the most common:

Insider Tip: Unless you have something specific you want to do at a particular port of call, choose whichever itinerary costs less. The Eastern and Western Caribbean ports of call are all beautiful and offer a variety of excursions.

Getting away on a cruise vacation is easy from Port Canaveral, Florida. Port Canaveral, located in Orlando, Florida, is a major cruise port that receives millions of passengers yearly. Most cruise ships transit through this port go to destinations like Panama Canal, the Bahamas, and the Caribbean. Several family-friendly attractions are also located nearby the port, making it an ideal destination before or after you take a cruise. 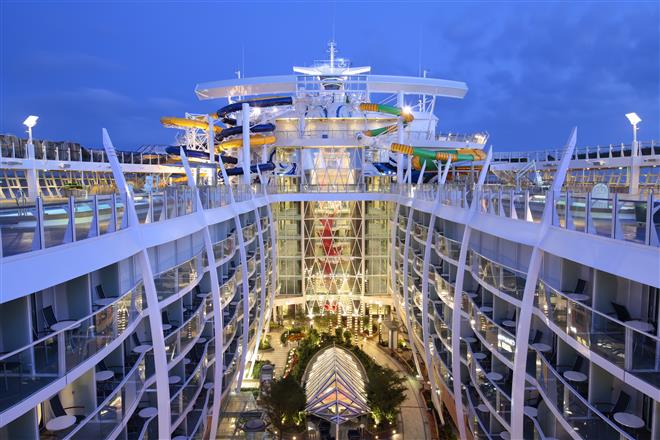 Serving millions of passengers every year, Port Canaveral is the one of the most active cruise ports in the world. The Caribbean, Bahamas and Mexico await you after taking off from the Florida coast. Whether youre looking for excitement or relaxation, your cruise from Port Canaveral is sure to deliver in spades.

You May Like: What Is The Worst Cruise Line

The following cruises out of Port Canaveral are great deals and rated between 4 and 5 stars by our reviewers:

Cruises Out Of Port Canaveral Florida

Most Orlando-based cruises with Disney Cruise Line and Royal Caribbean go to the Bahama and Caribbean. The Caribbean Sea and Gulf of Mexico are notoriously famous for calm waters so if youre concerned about the movement of the ship while at sea, Bahamas cruises are perfect for earning your sea legs.

Both Disney Cruise Line and Royal Caribbean follow similar itineraries, they often depart on the same days and at the same time.

Port Port Canaveral cruise ship schedule shows timetable calendars of all arrival and departure dates by month. The port’s schedule lists all ships with cruises going to or leaving from Port Canaveral, Orlando, Florida. To see the full itineraries and their lowest rates â just follow the corresponding ship-link.

Recommended Reading: Where Do Cruises Leave From Seattle

For FY2018, the seaport reported a record year with USD 103,75 million in total revenues . Cargo and cruise shipping volumes were also an all-time high. The number of handled cruise ship passengers increased by 7,7% – to 4,568431 million. Port’s handled cargo tonnage increased by 6,9% – to 6,404944 million tons. Port’s total economic output was USD 3,9 billion with around 32650 jobs supported including 17200 port workers .

For FY2019, the port had ~5% growth in revenues from cruise shipping. By homeporting operations Port Canaveral is currently ranked the world’s 2nd-busiest cruise port with handled in 2019 total 4,634154 million passengers .

Port Canaveral is beautiful no matter the time of year, so there isn’t a best time to visit. The weather is nearly almost always perfect at any time of the year, but there are times to visit when there are fewer people also visiting at the same time. The majority of people opt to visit here between October and April. This is because this is the time of year that there is the best weather by definition, and everything is opened. Though many people don’t visit in the summer months, Port Canaveral is still just as beautiful!

Don’t Miss: Can You Make Payments On Disney Cruise

Millions of passengers stop by Port Canaveral each year, the cruise port located in Orlando, Florida. Major cruise lines such as Carnival, Disney, Norwegian and Royal Caribbean frequent this port. These ships primarily cruise to the Bahamas, the Caribbean and the Panama Canal. The port itself also features many family-friendly attractions nearby, making it a good place to extend your trip before or after a cruise.

A must-see is the Kennedy Space Center, an original NASA Launch Operations Center where launch operations for the famous Apollo, Skylab and others were held. The site features educational experiences, dining, an IMAX theater, and shuttle launch simulations. For more interactive fun, stop by the Exploration Tower, which has seven floors of games, exhibits, and an observation deck at the very top.

If youre looking to optimize your beach time before heading off to the beautiful beaches of the Caribbean, Cocoa Beach is a popular spot. Its home to the original Ron Jon Surf Shop, where you can take surf lessons, or just soak in the warm temperature.

Lastly, no stay at Port Canaveral would be complete without a day trip to Walt Disney World. Some cruise lines even offer motorcoach transfer to the parks, so you wont need to worry about transportation. When youre just miles from the Happiest Place on Earth, visiting this park is a must, especially when travelling with kids!

Most people know Orlando as Americas theme park capital but did you know you can cruise from Central Florida as well?

Port Canaveral is one of Florida’s busiest cruise ports and its less than an hour away from Orlando by car.

Disney Cruise Line and Royal Caribbean offer similar itineraries, but their onboard experiences are quite different.

Port Canaveral is the nearest Disney World city, situated about one hour east of Orlando by car. The Orlando International Airport is 45 miles away. The distance to Tampa is two hours and to Jacksonville – two hours and a half.

There are seven cruise terminals. In regular use are 5 – numbers 3, 5, 6, 8 and 10. They are newer, located on the Port’s north side and serve larger ships. Southside terminals are older. Gambling ships use Terminal 2. Terminal 3 is the new Carnival Cruise Line’s terminal. Terminal 4 is also used, but rarely.

In late-April 2017 at Port Canaveral started construction works of a new cruise terminal. The facility is on the site of “Cruise Terminal 3” , west of Jetty Park and east of The Cove . On June 7, 2017, engineering and design works for the new terminal were officially approved. Canaveral Port Authority Commissioners approved USD 1,2 million funding for CH2M Engineering’s project management contract. This was the first phase of the 2-year work plan to construct a modern facility with capacity to serve vessels up to 8,000 passengers. At the new passenger terminal can berth even the world’s largest cruise vessels of RCI’s Oasis-class. CH2M Engineering provided engineering, support services and waterside design for the new Terminal 3.

The project’s budget is USD 163 million , of which US$50M were contributed by Carnival Corporation. Ranked the USA’s largest single building project, it included demolition of port’s oldest terminal, construction of a brand new 2-story building , upgrading the existing berth and building a new parking garage, roadway and utility improvements. This 20-months long, multi-phased project included 5 separate contracts. Demolition works of the existing Terminal 3 building started in April 2018, at the cost of USD 210,000.

Construction works officially started on March 18, 2019, and the Terminal was completed in September 2020. At the new CT3 terminal was homeported Carnival’s largest vessel . The new liner is LNG-bunkered by a barge dockside.

Perfect Day at CocoCay is where you can conquer the tallest waterslide in North America and snap a shot from 450ft. up in a helium balloon. You can grab a drink at the swim-up bar, soak up the sun in the largest freshwater pool in the Bahamas, or get a taste of Bora Bora with your own floating cabana.

Most experiences at Perfect Day at CocoCay are included with your cruise fare, like the Oasis Lagoon Pool, Captain Jills Galleon, Splashaway Bay aqua park, and the sports courts on South Beach.

Food is free on the island and if you purchased a drink package on the ship, that works on CocoCay too!

You can also choose upgraded experiences for an additional fee such as Thrill Water Park, a must-do for teens! A lot of families will send their teens to Thrill Water Park for a few hours while they enjoy the pool or beach.

My favorite thing to do at Perfect Day at CocoCay is to relax in the Oasis pool or the beach. I hardly ever do the upgraded experiences here except maybe Coco Beach Club, which is a VIP section on the island with special dining, private beach, infinity pool, and cabanas.

One of my favorite things about Disney Castaway Cay is that Disney left it as natural as possible, yet everything you need for a beach getaway is herefrom lounge chairs and beach umbrellas to cabana rentals and family-friendly entertainment.

Go Off The Beaten Path In Orlando

With so many things to do in Orlando, youll quickly discover your options are limitless. From award-winning golf courses to fascinating museums and outdoor adventures, this bustling city has fun activities for every type of adventure seeker. Before you cruise out of Orlando, venture out to explore and discover for yourself why its nicknamed The City Beautiful.

Read Also: What Is The Best Transatlantic Cruise

What Is The Best Singles Cruise