Do Mississippi River Cruises Have Casinos

What Cruise Ships Have 5 Person Rooms

What Is The Best Walkie Talkie For Cruise Ship

Culture And History Of The Statue Of Liberty

In 1865, French historian Édouard de Laboulaye proposed gifting the United States a statue in order to commemorate the centennial of the Declaration of Independence and as a symbol of friendship between the two nations.The large-scale statue was designed by sculptor Frederic Auguste Bartholdi, who hammered large copper sheets for the exterior and modeled Lady Libertys face after his mothers. The steel skeleton of the sculpture was designed by Alexandre-Gustave Eiffel, the visionary behind the Eiffel Tower.

Once the statue was completed in 1885, it was displayed in France before being taken apart to be sent overseas to New York. It arrived a few months later, and after being re-assembled, it was placed on top of a pedestal on Liberty Island. The Statue of Liberty was officially dedicated by President Grover Cleveland on October 28, 1886 in front of thousands of cheering spectators.

What To Expect When You Visit

The first step is to buy your ticket and its highly recommended that you buy it in advance.

The ferry rides between each stop run for about 10 minutes and allow extra time for boarding and disembarking.

Note: In case of any visitor who enters the Statue for either pedestal or crown access will have to clear security again.

Top Sights And Attractions For Cruises Past The Statue Of Liberty

The Statue of Libertys right hand proudly holds up a torch that symbolizes enlightenment. In fact, the statues official name is Liberty Enlightening the World. However, the torch you see today is actually a replica. After the original torch suffered extensive damage over the years, it was replaced in 1986 by a new copper iteration covered in 24K gold. The original torch is displayed inside Liberty Islands Statue of Liberty Museum.

In her left hand, Lady Liberty cradles a tablet that is inscribed with the United States of Americas independence date, July 4, 1776, in Roman numerals. Édouard de Laboulaye, the Frenchman who originally came up with the idea of the monument, wanted the Statue of Liberty to arrive in the United States by 1876, in time for the centennial of American independence. However, the completion of the statue took longer than expected and missed the deadline by 10 years, ultimately arriving in New York Harbor in 1886.

Lady Liberty wears a seven-spiked crown, but the exact symbolism of these seven peaks is still debated. Some say the seven spikes represent the seven seas and seven continents, while others argue that the spikes are sun rays that symbolize the statues divinity.

A product of NYC’s melting pot, I have always been fascinated by immigration and it’s importance to the United States. Journey with me back to a time when Ellis Island could be an “Island of Hope” or an “Island of Tears. “Today it is estimated that forty percent of the entire US population can trace at least one relative’s immigration through the port of New York and Ellis Island. One of the first things they saw as their ship entered the harbor was the Statue of Liberty, holding aloft her beacon.On this tour we will explore both of these iconic, national landmarks.Our first stop will be the Statue of Liberty a 100th birthday gift to America from France. We’ll meet some of the key people involved in her creation and investigate the symbolism in the statue.Our next stop, Ellis Island, is where twentieth century America was born.

What’s Included With Your Ticket 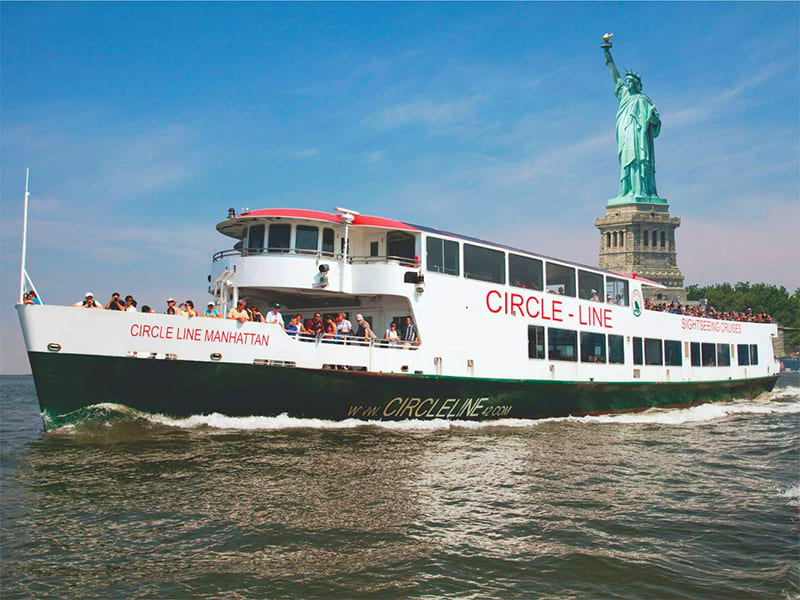 How to Find the Ferry

Statue Cruises is the only way to access two of New York City’s most beloved historical sites, the Statue of Liberty and Ellis Island. Boats cruise from both Battery Park on Lower Manhattan and Liberty State Park, across the harbor on the New Jersey side. Group tours are available, as well as school group and community group tours. With ferries leaving approximately every twenty to thirty minutes from both locations, visitors can leave shore anytime between 9:30 in the morning and 3:30 in the afternoon.

Virtual Tour Of The Statue Of Liberty

You May Like: How Much Is Parking At Miami Cruise Port

Cruises To The Island

If you want to go straight to the Statue of Liberty, there is only one service, Statue Cruises, which is allowed to travel to and from Liberty and Ellis Island.

While you wont pay for admission to the island, you will have to pay for the ferry travel.

If you want to enter the landmark itself, you can also purchase either pedestal or crown access.

There are both reserve and flex tickets available.

Reserve tickets are timed, so they must be used on a specific day and time while flex tickets allow you to visit whenever you want.

The main difference between these types of admission is that flex tickets do not include access to either the pedestal or the crown.

If you want to enter the statue, you will need a reserved ticket.

Each ticket includes access to Liberty Island, Ellis Island, and the Statue of Liberty Museum. However, you must purchase a pedestal or crown ticket for access to these areas.

For more details, make sure to check our post covering how to get to the Statue of Liberty.

Podcast Episode: Listen to tour guides Lori and Katherine discuss visiting the statue and Ellis Island on an episode of our NYC Travel Tips podcast.

This podcast offers bite-sized audio clips with tips on how to plan your trip to NYC. You can get our podcast on Apple, , or wherever you get your podcasts.

The Hard Hat is on the other side of Ellis Island and its tour ticket offers a 60 minute guided Statue of Liberty tour of the unrestored Ellis Island Immigrant Hospital Complex. The tickets also come with a self-guided audio tour headset as you start touring around both Liberty Island and Ellis Island. The Hard Hat Tour ticket gives you access to the Screening Facility queue. This saves you time at the departure point.

What to know before visiting:

Statue Of Liberty Views From Midtown Or Upper Manhattan

If youre staying in Upper or Midtown Manhattan, the most efficient way to see the Statue is aboard the Liberty Cruise, departing from Pier 83.

Instead of fighting traffic to get a downtown view of Lady Liberty, jump on a Circle Line boat in midtown. This fully guided tour of New York Harbor features up-close views of the Statue of Liberty.

Pro Tip: Youll get to see other downtown attractions including One World Trade Center and the High Line from the water as well!

What To Do When You Arrive 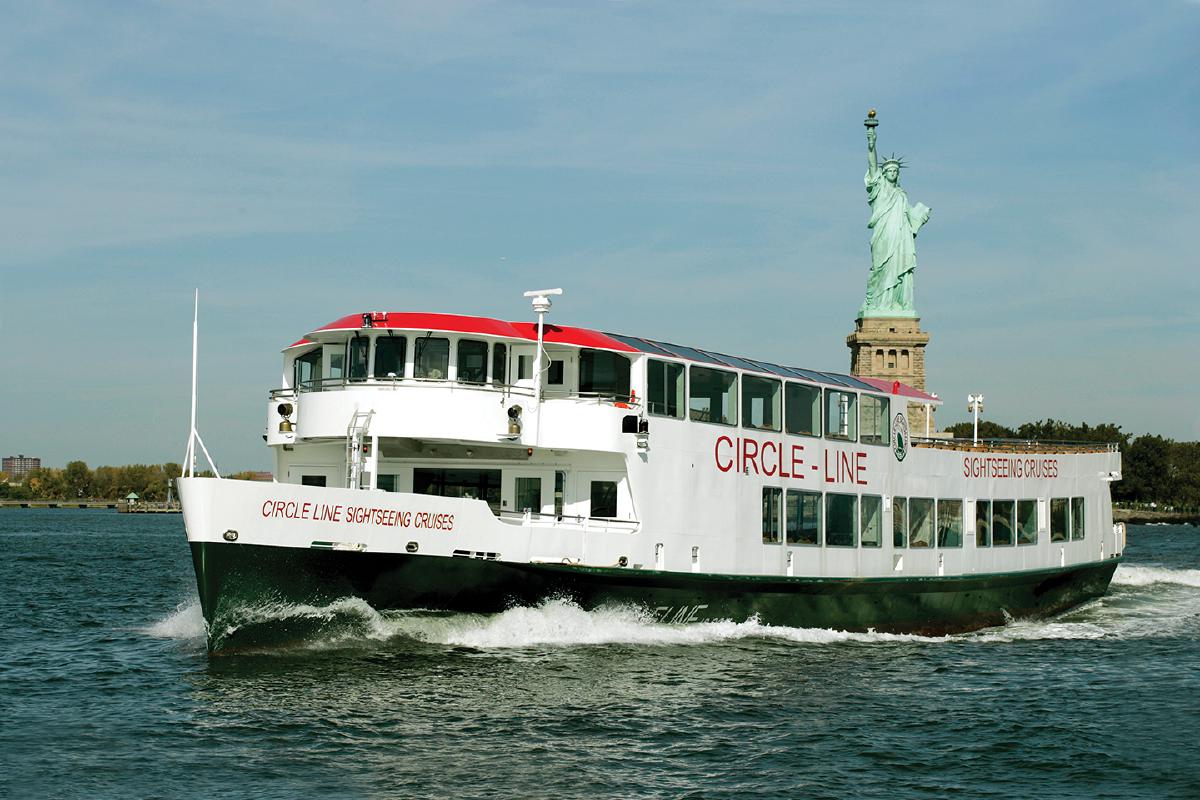 The ferry ride from Battery Park to Liberty Island takes just 15 minutes. The ferry docks for about 10 minutes at each island before departing.

There are only two places to catch the Statue of Liberty ferry: Battery Park in New York or Liberty State Park in New Jersey.

Anyone boarding the Statue of Liberty ferry has to undergo an airport-style security screening. Large bags, markers, sharp objects, and weapons arent allowed on board the ferry.

The ferry is accessible for wheelchairs, but seating can be limited during the busy season. There are also a few steps for passengers who want to go up to the deck.

You May Like: Does Disney Cruise Leave From Galveston

During the 60-minute New York City sightseeing cruise, you enjoy the wonders of the New York Harbor. Departing from Pier 36, the Majestic Princess travels the East Side of Manhattan before sailing within close proximity to the Statue of Liberty. On our NYC cruise, enjoy the view of the iconic Brooklyn Bridge, South Street Sea Port, Freedom Towers, Ellis Island, and other well-known landmarks.

The Motor Yacht Majestic Princess is 110 and USCG certified to carry up to 300 passengers. She was designed for sightseeing/entertaining as her spacious decks and panoramic windows provide spectacular views of the New York City skyline. The vessel is climate-controlled for the comfort of her passengers. The vessel offers indoor and outside seating.

Confirmation will be received at time of booking. Infant rates apply provided they do not occupy a seat. Please note, this NYC sightseeing tour does not land at either Liberty Island or Ellis Island.

Lady Liberty Sparkles As The Sun Sets Over Manhattan

The Statue by Night Cruise allows you to have the best of both worlds. Youll be able to take a boat tour of the Hudson River to see the Statue and return with enough time to make your dinner reservation!

Departing from Pier 16 at South Street Seaport, youll step off the dock after your hour-long boat ride and be in close proximity to trendy downtown restaurants . Purchase snacks on board or even enjoy a pre-dinner cocktail as you bask in Lady Libertys glow.

Pro Tip: The Statue by Night tour is also a great option for families! End a day of NYC fun with a beautiful sunset and famous landmarks.

Begin your Statue of Liberty guided tour by boarding the ferry via the Reserve Line. Listen as your guide tells you about the remarkable history of the Statue of Liberty and the inspiration it has given to millions of immigrants. After disembarking on Liberty Island, tour the grounds and take in views of the amazing New York City skyline.

Board the ferry for Ellis Island. As you tour the grounds, your guide will tell you about the millions of immigrants who passed through Ellis Island. Visit the museum to deepen your understanding of the statues history.

At the conclusion of the Statue of Liberty tour, you can stay on to explore more, or even look for your own familys records, before returning to the city by ferry.

Don’t Miss: Which Side Of The Ship Is Better For Alaska Cruise

At Circle Line Sightseeing Cruises, we like to think that weve perfected the fine art of the New York City tour. We have hosted over 60 million passengers on our cruises since we opened in 1945. Today were the only cruise company in New York Harbor exclusively dedicated to sightseeing. Our boats are specifically designed to let you see as much as possible in any weather. With over-sized glass windows that offer magnificent views of Manhattan, our steel vessels offer as comfortable a setting as you can get, all year round. Our dedication to offering you the best possible NYC experience has earned us world-wide recognition as one of the best boat rides in the world.

Theres no better way to see the Statue of Liberty! Now on iconic Circle Line Sightseeing vessels, this 60-minute cruise and take advantage of the elegant amenities inside while admiring the spectacular sights outside. Narrated by our informative and wildly entertaining guides, this tour will cruise by the legendary landmarks of downtown and pause at the feet of Lady Liberty. Capture perfect pictures from the breezy sundeck or from the climate-controlled inside. Its an unforgettable experience!

What Is The Best Singles Cruise